The early Railway Age history is incomplete without the mention of the Newcastle Central Station. The station is still busy as ever, even with the Tyne and Wear Metro claiming a good part of its suburban traffic. It was designed by architect John Dobson, with the financing coming from the Newcastle and Carlisle Railway (N&C), George Hudson’s Newcastle and Darlington Junction, and Newcastle and Berwick Railways.

There has been no change to the building structurally since its official commissioning by Queen Victoria and Prince Albert in 1850. However, the royal entourage was able to see just the trainshed and a few rooms at the time of commissioning. The entire building was only completed and ready for use in January 1851. Similarly, the portico, which is the biggest physical attraction, was constructed in 1863.

The Carlisle Company officially joined the NER in July 1862, having given up its independence. This made the NER the station’s sole owner – a development that prompted it to increase and maximise the number of platforms while keeping the building in the same shape. But this would not be for long. The increasing network and traffic growth meant there must be a significant enlargement. So, between 1888 and 1894, the station underwent minimal extensions, especially at the west end that links the King Edward Bridge, which was opened in 1906.  That was not all – the electrification of the East Coast Main Line followed, and this propelled even more changes, including the introduction of an extra island platform by the British Rail building. The platform began operations in 1990. 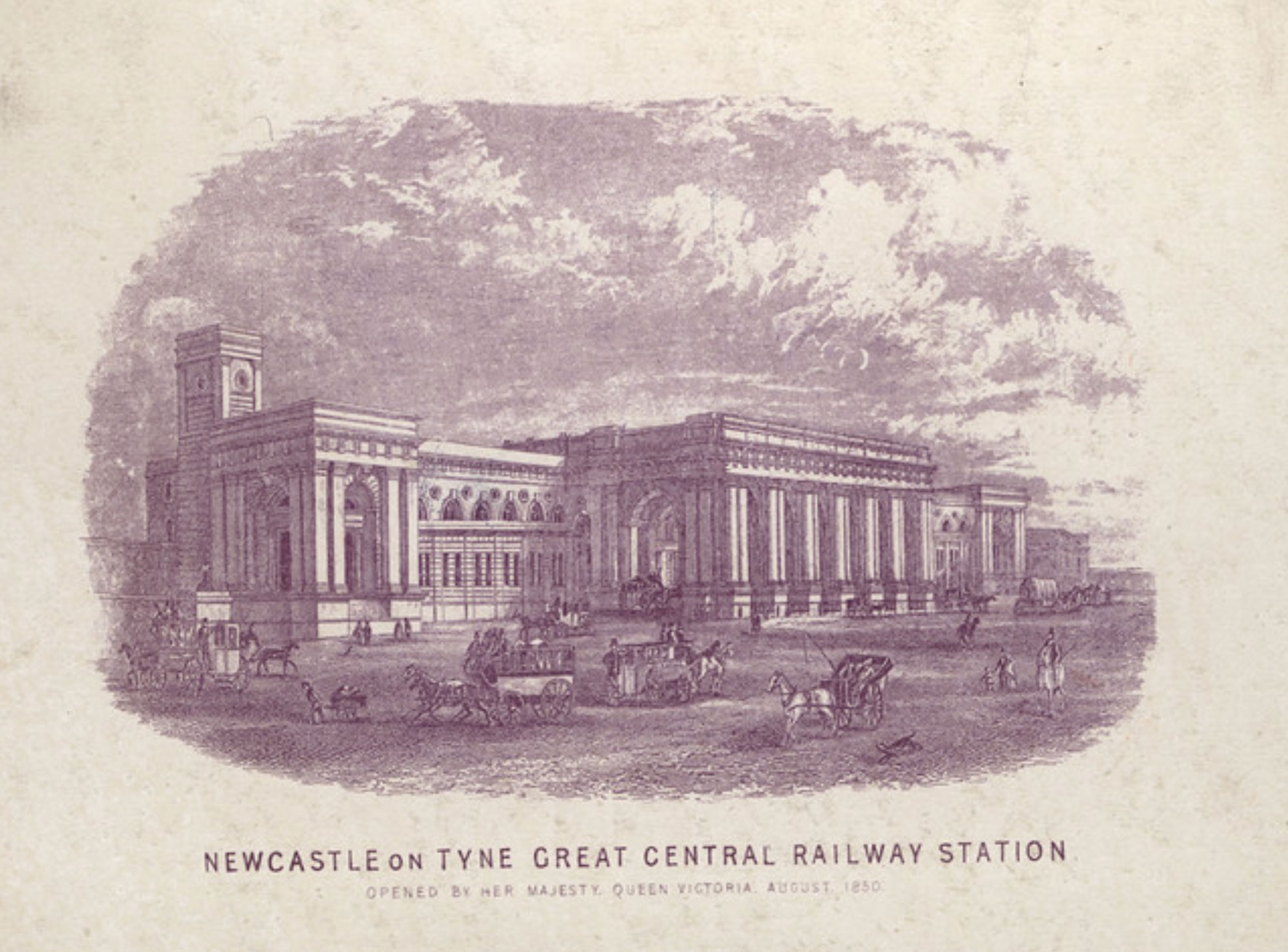 The 19th century saw many great multi-span arched trainsheds, but Dobson’s was the first. There were initially three-span ‘nave and aisles’ shed and five-bay platforms. The bay platforms were the go-to for all the routine traffic.  Despite its visual simplicity, the trainshed is more complex than people consider it to be. For instance, if you probe into the structure by stripping the panelling, you will discover a durable timber truss right on the top of the arcade. The diagonal struts of the timber shed the loading from the nave ribs straight onto the columns, same with the loading on the ribs of the side pans.

The Central Station remained incomplete in 1850 for a single reason – George Hudson’s fall from grace. The Railway King took some time before finally backing the ambitious proposals of the famous Newcastle architect, John Dobson (1787-1865). The approval only came after a request from the Newcastle and Carlisle railway. The initial proposal comprises a portico that runs through the whole length of the station frontage, alongside an even more spectacular architectural design for the building.

READ:  A concrete house inside a cliff

Sadly, Hudson relied on the share capital of his companies to arrive at the made-up large dividends they report. This only became known in the first quarter of 1849. This discovery came with ripple effects, including his despatch and suspension of several expensive projects. The Central Station was one of these. The new investors reviewed the project and decided not to go with the massive arcade. Therefore, Dobson had to revisit the design and include more company offices without altering the existing stone cut for the arcade. In response, Dobson came up with successive schemes for a central portico that is modest yet majestic, but the implementation was not forthcoming.

Dobson revised the frontage, but it never lost its imposing appeal. He removed the six arches on each side of the central portico and replaced them with arched windows or lunettes, including plain windows in pairs right under them. We should also talk about the end pavilions – the detailed approach in the original design was maintained, but pilasters and windows replaced the attached columns and statutes in the frontal recess. 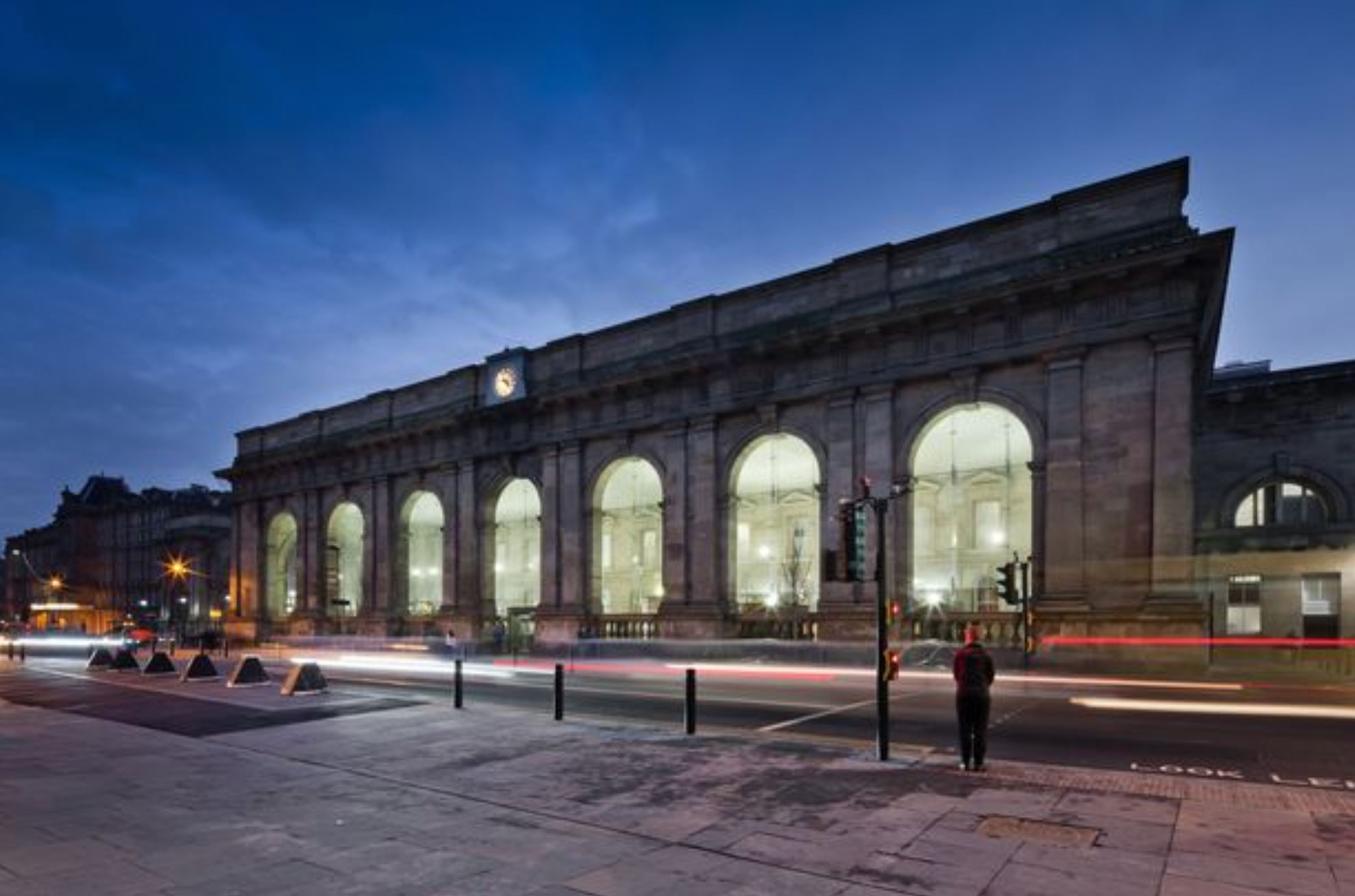 Interior of the Office

Let’s talk about the new office interior. Several impressive interior designs were adopted in setting up the office range situated in the east end. The upper floors housed the head office of the York Newcastle and Berwick Railway, with the refreshment rooms occupying the lower floor. The most interesting design of the offices includes a pair of double-height rooms, where mezzanine galleries rotate to serve book cupboards situated at the upper levels. The arrangement was much like the library of that period.

In terms of the interior designs for the platform, the outstanding design was the refreshment room. It got even better in 1893 when William Bell, a NER architect, convinced his directors to change its outlook to Burmantoft’s faience. This gave birth to a magnificent and lustrous product of the Leeds Fireclay Company and its future adoption for the Newcastle’s Central Arcade, which began operations in 1906.

The portico leads to the trainshed via a vestibule that quickly reminds anyone of an Italian palazzo’s courtyard entry. On both sides of the carriageway are pedestrian ways, which are nowadays used only and completely by pedestrians.  If you observe the platforms from the concourse, the arches of the station roof and door and window openings highlight the platform’s curve, with the only noticeable break by the entrance. Then there are three portrait medallions, Victoria and Albert and King Edward VII, added in 1906 after he commissioned the famous bridge.

For the first three decades, the original trainshed had enough space to handle the traffic growth, especially with the introduction of one more island platform on the site of the carriage sidings in 1871. However, the call for an enlargement became too loud to ignore, forcing the NER to plan a major scheme through its engineer, Thomas Elliott Harrison. Thomas died in 1888, and the company Architect William Bell took over the project, completing the design and building of the tarnished extensions in 1894.

The scheme had two distinct parts: the first was a southward extension of the trainshed coupled with two different spans in a moderately modernised version of the initial design by Dobson. Consequently, a new island within the enlarged shed came aboard to replace two of the old through platforms. The old platforms were converted into bays by halting them midway, allowing a bigger concourse to fit in. The second part was an extension of the station towards the east, introducing a completely full-glazed ridge and furrow roof. Therefore, the through platforms were elongated, and a separate suburban station was created with its distinct concourse.

Contraction of suburban services and its implications

Suburban services have been contracted, leaving only one of the east end bay platforms opened. Only the part over the previous suburban concourse remains recognisable. Conversely, there is now an increased need for an additional island platform at right angles to the back of the trainshed’s wall erected in 1990. The King Edward Bridge, after its opening in 1906, enabled the East Coast trains to run through the station without reversing. This led to the elongation of the platforms at the west end and the introduction of new roofing, all indicating the minimal input of William Bell-led architect’s office in the later designs.

There has been a wide range of buildings on the station platforms over the past years. The early legacy of wooden shops and offices around the concourse left by the NER are still visible if you observe from the No. 2 signal box. However, these gradually made way for a better and modernised travel centre, especially after the razed old signalbox. The new design was undertaken by the BR Eastern Region’s Architect’s Office, Nick Derbyshire, in 2004.  The online ticket purchasing platform means there is increasingly lesser use for the building. This explains why modest retail units now occupy them.

READ:  The Sufism inside Architecture of Sindh

Assuming the NER’s wooden concourse buildings appeared socially uncomfortable and out of place in such a formal setting, we can say the parcels office situated on the station’s east side are even more ill at ease. These structures were introduced in 1906. They leveraged the arches under the station, with the frontage building serving as an arcadian line of wooden gables that led to the Westgate Road. However, fast forward to today, the structures have been transformed into modern-day budget hotels.

In 1910, the NER built the enticing frontage of Irving House. It was initially meant to be an office accommodation for the divisional goods manager. It was situated on a site that backs the station. It is one of the several office buildings William Bell opened in his time, alongside the West Hartlepool, Sunderland, Darlington, and Hull office buildings.

If you decide to go round the corner from Irving House, you will pass the Gothic delights of the Mining Institute before finding yourself at the Royal Station Hotel. The initial scheme introduced by Dobson on building hotels gave way during the 1849 crisis. However, a few guest bedrooms were built within the east end of the station building. It was not until February 1863 that a comprehensive hotel was built, in line with the design introduced by the first architect of NER, Thomas Prosser. This served the intended purpose for a few years until a major extension started around 1888.  The extension affected everything – including the street corner, the main entrance, and many more parts of the building.

Therefore, two more storeys and the attic were introduced, sitting right on the 1863 building. There was also an additional bedroom wing and banqueting hall at the end, introduced by the LNER in 1934.  The primary interest remains in Burmantoft’s faience interiors introduced by Bell. This interior came from the excessive overpainting in the last few decades of the 20th century.

To Wrap Things Up…

The railway history in the UK is quite rich. But even more rich are the architectural inputs and events surrounding it. What started as 18th-century designs and constructions have gradually and consistently metamorphosed into modern-day edifices with improved functionality and aesthetic satisfaction. The best part? These were made possible while these structures still retain their timeless look.

Even with tons of changes and improvements, the Newcastle Central Station remains one of the most prominent landmarks of the railway history and culture in the United Kingdom. While nothing is certain, there might still be a few exciting improvements and modifications in the pipeline. Will these happen, and how soon? That remains to be seen.