Reclaimed wood is a popular design trend today. This versatile building material has quickly gained momentum with some of the top designers and architects, and you’ll see it gracing commercial buildings across the globe. Fittingly, reclaimed wood has a long and storied past. The reclaiming of wood stretches back to the early twentieth century with methods evolving over time. Here’s an abridged history of reclaimed wood and a look into its impact on contemporary architecture and design.

Over the centuries, wood has nearly always been the building material of choice. Dating back to about 8,500 BC, wood is the world’s second oldest building material, predated only by brick. Wood consumption was particularly high during the Industrial Revolution and further increased in the period following World War II. As a result, by the mid-twentieth century, old-growth wood, wood from trees that grew naturally for over a 100 years, became increasingly rare. Old-growth wood is still sought after today because it’s extremely durable. As a tree ages, its wood grows denser and stronger, which is ideal for building. 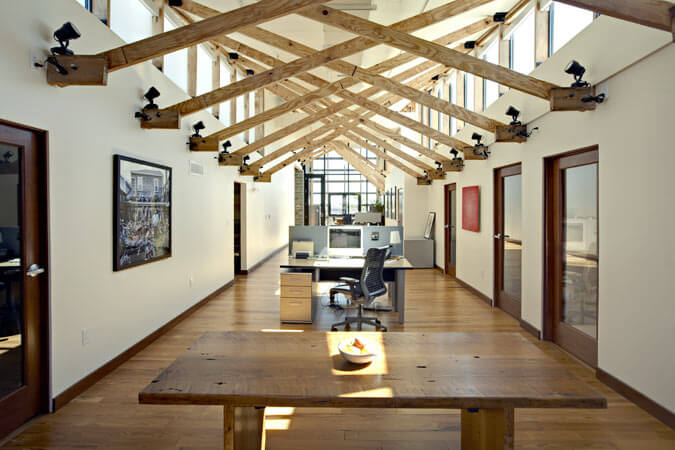 From The Architect’s Newspaper: The renovated Green Building in Louisville, Kentucky uses beautiful old growth wood that is original to the building

While it makes for a great building material, living old-growth wood is almost nonexistent in the United States. According to the United States Forest Service, there’s only about 3 percent of old-growth forest left. However, old-growth wood still exists in many buildings, especially those built in the early twentieth century. Since this wood is so valuable, it’s often reclaimed from older buildings that have fallen or been demolished. When architects are in search of high quality wood that will serve as a visual and load bearing component, they often seek to spec reclaimed old growth wood.

Reclaimed wood delivers on aesthetics, but there are two central reasons why reclaimed wood has surged in popularity, sustainability and depth of supply. Architects and designers are seeking to create buildings that contribute more than they consume from the earth. Choosing reclaimed wood utilizes an existing resource and eliminates the need to cut down living trees. When builders elect to use reclaimed wood, it is a sustainable option that further protects living old-growth trees from being unnecessarily cut down. 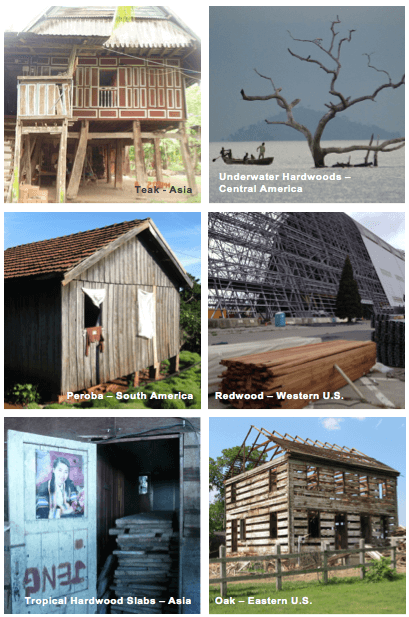 From TerraMai: We source our reclaimed wood from all around the world using a variety of sustainable methods

Over time, there has become more awareness of full impact cost for materials, and commercial architects and designers have become more tuned in to energy costs that come with sourcing new wood. During the cutting, processing and transport of new wood, much energy is expended in various forms. Reclaimed wood requires fewer resources and thus, consumes less energy in the process.

There are many approaches to sourcing reclaimed wood, but post-industrial and post-consumer are the most common. At TerraMai, we look for any instance where quality wood is considered a waste product and is slated for the landfill, wood chipper or firewood pile. Working with sourcing partners to salvage this discarded wood ensures our deep and continuous supply of beautiful reclaimed woods. We also like the idea of salvaging wood so it can be used for its highest use potential with the hope that reclaimed wood can have many lives and be repurposed again at some point.

Typically, the salvaged wood is dried, milled, and finished with stain, oil or poly to prepare the wood for its end application. When the character of reclaimed wood is preserved and the material is finished, it’s often the most beautiful it’s ever been in its lifetime. Reclaimed wood can be a utilitarian component as well as contribute charm and a timelessness to a space. It’s a win-win; builders gain aesthetic and functional advantages while preserving trees and what remains of old-growth forests.

READ:  How do I know when a tree needs to be cut down? 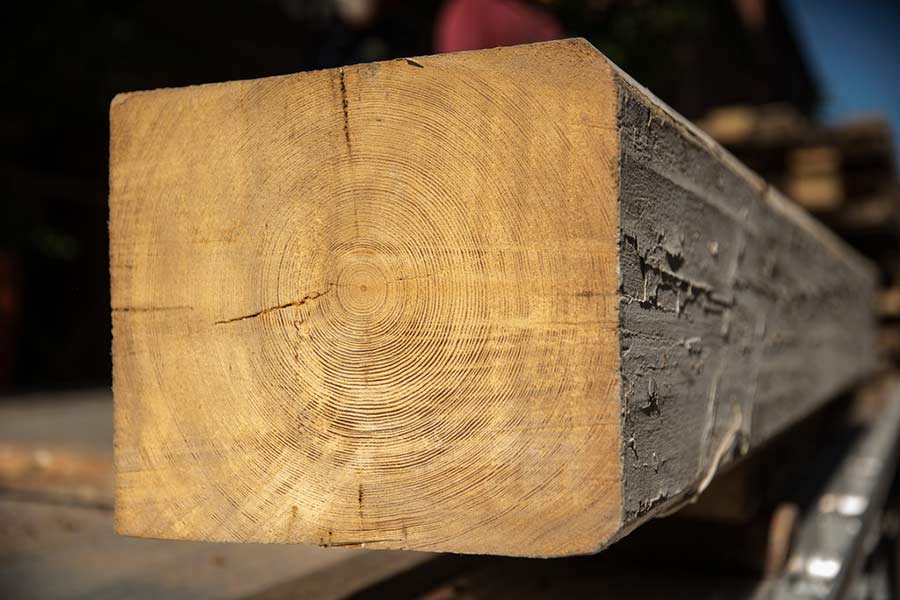 From the New York Times: This piece of lumber was reclaimed from a building in Manhattan, where reclaimed wood is seeing widespread use

The use of green building materials like reclaimed wood is also helpful for buildings pursuing various certifications such as LEED, WELL, and Living Building Challenge. Since reclaimed wood is both sustainable and biophilic, it positively impacts both humans and the natural environment. This in turn satisfies requirements of many building standards. 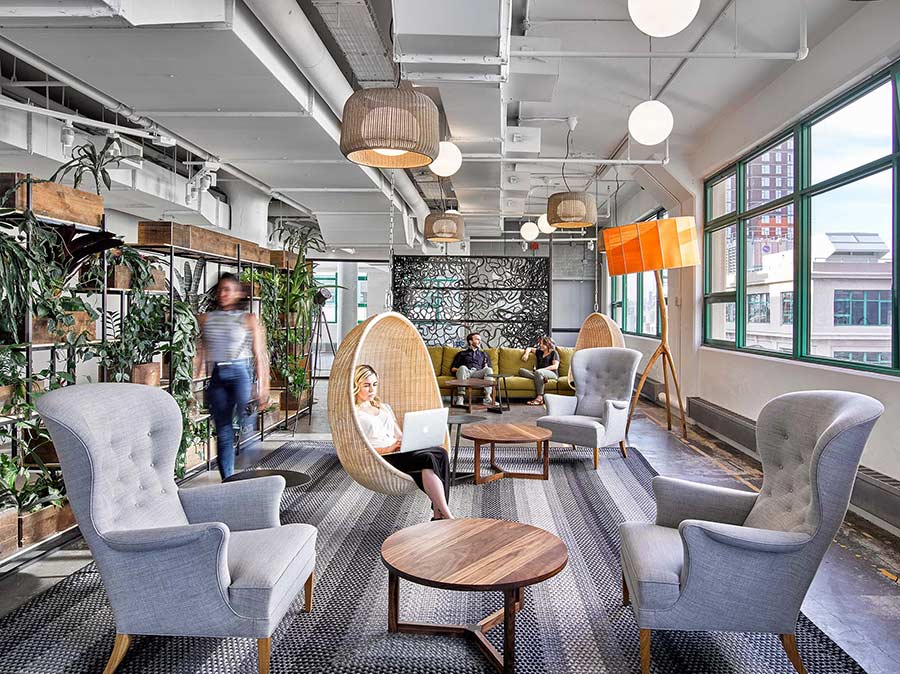 From Gensler: Etsy’s Brooklyn HQ gained Living Building Certification thanks in part to its use of reclaimed wood

From Trend to Trailblazer

Like artisanal goods, reclaimed wood embodies the essence of craftsmanship and brings an authenticity reminiscent of simpler times. While it first enjoyed popularity as a niche product, reclaimed wood quickly became a standard material for commercial projects. At first, its use was common for businesses like coffee shops and restaurants that aimed to evoke an artisanal atmosphere. It swiftly crossed over to commercial buildings and has since become a favored choice for spaces like offices, restaurants, and hotels. As health and wellness benefit data surfaces, reclaimed wood is finding its way more and more into hospitals, schools and retirement homes. 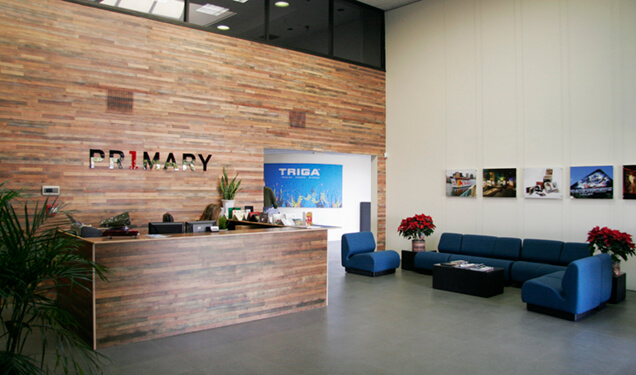 From Primary Color: Reclaimed wood is a great choice for office lobbies

Appropriately, the rise of biophilic design bolstered the demand for reclaimed wood. All 14 patterns of biophilic design center around a deeper connection to nature, and reclaimed wood is a natural biophilic fit. It excels at fostering a material connection with nature, and its natural patina can connect occupants to natural systems, which creates an environment that is “relaxing, nostalgic, profound, or enlightening, and frequently anticipated” according to Jonce Walker in Terrapin Bright Green. In other words, wood helps people feel better and look forward to being in a space.

This is scientifically backed by numerous studies that have analyzed the complex web of different types of relationships between humans and nature. Reclaimed wood in particular has wellness-enhancing properties that can improve how people feel, work, and interact in a space. The presence of wood lowers heart rates and stress responses, so occupants feel better physically, mentally, and emotionally. When used in conjunction with biophilic elements like natural light and greenery, or in spaces meant for refuge or collaboration, reclaimed woods’ effect intensifies, resulting in a built environment optimized for human well-being. 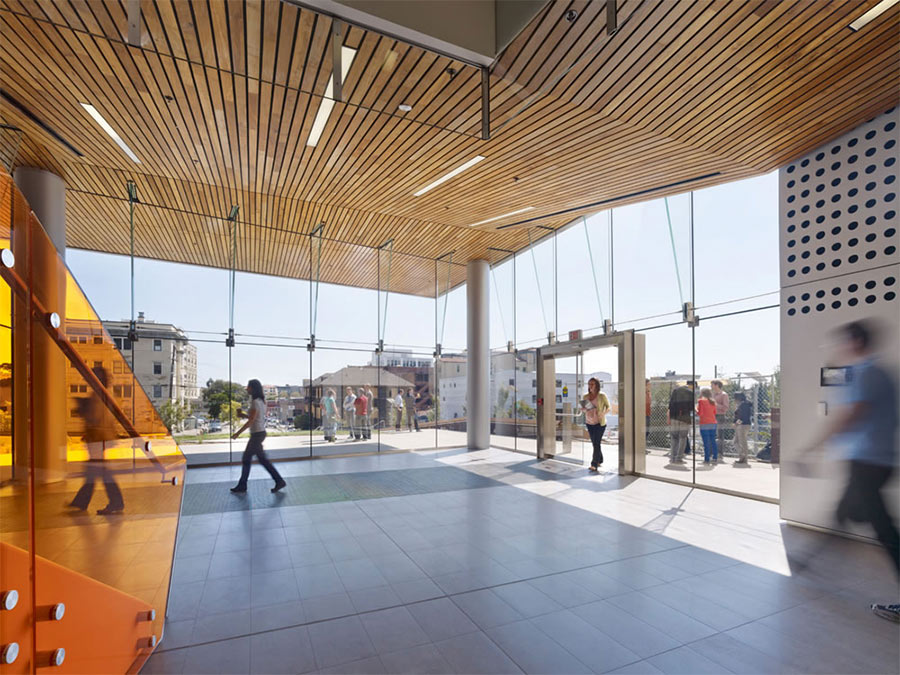 From GB&D Magazine: Reclaimed wood is renowned for its ability to create a calming atmosphere

When architect & design experts realized the benefits of reclaimed wood in commercial projects, word began to spread and reclaimed wood use began to really grow. At this point, reclaimed wood ceased to be a mere trend and became something more significant. The broader adoption of reclaimed wood coincided with the new era of sustainability in A&D. Now, more than ever, the focus on environmental friendliness, biophilic design and occupant wellness encourages builders to seek out greener materials and methods. And, reclaimed wood, while providing an eco-friendly option, can hit a designer’s aesthetic vision.

Today, you can find all types of reclaimed wood in commercial buildings everywhere. From the floors of office lounges to the beams of a five-star hotel, reclaimed wood has cemented its spot in contemporary design. Many designers have gotten especially creative with reclaimed wood implementation. 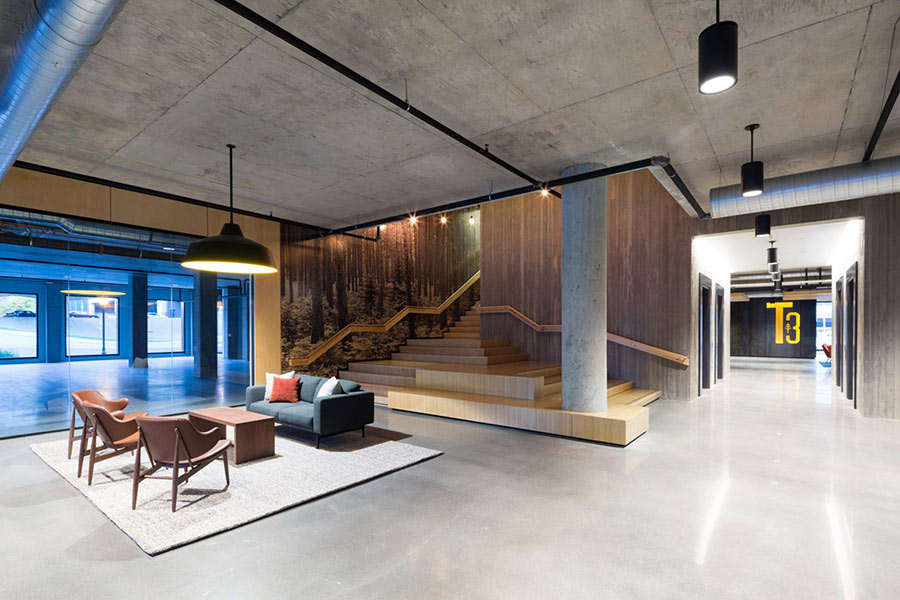 Even though reclaimed wood began as a design trend, it has become much more than a fad. Its sustainable nature and scientifically backed benefits have made it consistently one of the best green building material choices for commercial projects. Reclaimed wood is also a major signifier of the future of the Architecture & Design industry. Building is greener and more health-centric than ever before, and reclaimed wood is one of the many vehicles that have allowed A&D to move forward in a more positive, sustainable direction.